Sunday, 26 June 2022
HomeVideos for SaleAmerican Challenge and River Side Grand Prix
Back to: DVD 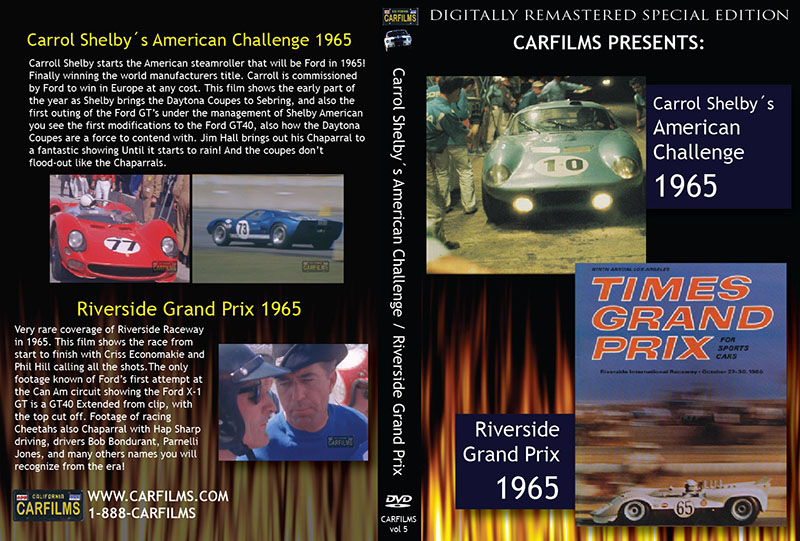 American Challenge
With shipment USPS for $0.00
Base price $19.95
Description

Carroll Shelby starts the American steamroller that will be Ford in 1965! Finally winning the world manufacturers title. Carroll is commissioned by Ford to win in Europe at any cost. This film shows the early part of the year as Shelby brings the Daytona Coupes to Sebring, and also the first outing of the Ford GT’s under the management of Shelby American you see the first modifications to the Ford GT40, also how the Daytona Coupes are a force to contend with. Jim Hall brings out his Chaparral to a fantastic showing Until it starts to rain! And the coupes don’t flood-out like the Chaparrals.

Very rare coverage of Riverside Raceway in 1965. This film shows the race from start to finish with Criss Economakie and Phil Hill calling all the shots.The only footage known of Ford’s first attempt at the Can Am circuit showing the Ford X-1 GT is a GT40 Extended from clip, with the top cut off. Footage of racing Cheetahs also Chaparral with Hap Sharp driving, drivers Bob Bondurant, Parnelli Jones, and many others names you will recognize from the era!

There are yet no reviews for this product.